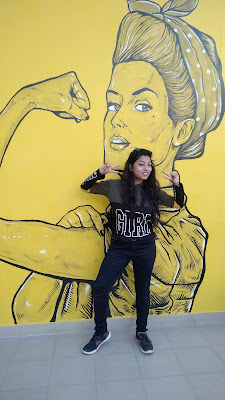 Is it just me or does anybody else puts on FRIENDS in the background while doing work? Yeah! I guess, I am not alone. Well FRIENDS shows us a very familiar story about working hard, trying to grow, getting together with the people you like, pretty much what I’ve always have wanted.
It’s almost 26 years and still FRIENDS remains the favourite sitcom for almost everyone. The 6 characters from the sitcom are not just characters, they literally are your friends. They connect with you. I think the reason they are able to connect is that the show never ruled out the harsh realities of life. Be it Rachel waitressing after leaving her father’s money, Monica taking up that awfully sucking costume-worn job at some café, Joey’s constant struggle during his acting career, Phoebe and Chandler even after having such a bad childhood they turning out to be good. It could easily be anybody’s 20’s life.
Being a FRIENDS fan myself, who has watched the show as many times as the number of seasons it has, I am so into it that I would still laugh my ass off in the episode of ‘ TOW no one is ready’ or I would cry whenever Ross and Rachel breakup, I’d still go aww everytime Chandler proposes to Monica, I fall for Joey everytime he asks ‘How you doin?’, and Chandler one liners - ‘could he be any more sarcastic?’.
And that’s why even after more than two decades FRIENDS remains FRIENDS. It not only has its perfect comic timing and chandler’s one liners sarcasm, but also its own moments too. For me, the best being when phoebe talks to her embryos. It is difficult to start over a new career after a time, but the show made us understand that it’s never too late to follow your dream job. It taught me to be okay if you are weird and still be happy while embracing it.
FRIENDS has also shown support to different taboos or issues in the society. Be it homosexuality, lesbians getting married, unconventional ways of conceiving babies. Well, put the actors in any other movie or series, it’ll still be FRIENDS for me. I could be given plenty of other series to watch and I still would end up watching FRIENDS over and over again. It is sometimes like a lullaby to me. I can watch any of the episodes in any mood and I’ll end up having a smile on my face. And as I am writing this, I am watching Chandler planning to propose Monica, I am so gonna finish this time and will somehow start again from
Ross’s
“HI...!!”.
“Could I be any more into FRIENDSverse.”

Popular posts from this blog

Turning point of my life By Nupur Shirbhayye

May 30, 2020
Turning point of my life. I, Nupur an Interior Designer by profession born and brought up in a small village place but it never restricts me from keeping my aims high. With this purpose keeping hopes high I shifted to Nagpur to achieve my destiny which is to be carved by me on my own. But still I am a free bird and free will designer may be in my version I take my life seriously but till the day talking about, I was in same notion. Life was like fun and easy going for me night life, wild parties free expressing of living was by note to evolve my life. New Trends and fashion can define me to such an extent that life seems to so Super Cool to me. But things are going to take a “U” turn with a single casual visit of my life may be for Good, I don’t Know? A sudden lightning call from one of my friend “Nupur come down to my office immediately with your CV right now”. Just this much for that friend, no details of anything, nothing about office, nothing about type of work, and right now
8 comments
Read more

CORONA IS ALSO A BLESSING BY MRUNAL WANKAR

May 30, 2020
CORONA IS ALSO A BLESSING Life after the Covid-19 outbreak will never be the same as before. We are at the beginning of the end, waiting for a new beginning. Planet Earth will break its cooperation agreement with mankind unless we urgently revise our behavior. Over the last month, I witnessed possibly the largest global emergency in my life. My grandfather used to told me, at that time while emergency like situation or war like situations occurs there were this kind of lockdown are happened. That time no shops are opened or not a single man are roaming on the roads or not a single person travels. And now I am experiencing the same kind of situation. Not because of actual war which were happened at that time but this is the kind of manmade thing , because of that all the World are battling with this. But I am in my happiest time after so long, in terms of staying at home for long time almost a month with family only. I have joint family so I am not getting bored of this lockdown but act
17 comments
Read more

May 13, 2020
La' Quarantino No wonder Corona is a curse to the world but during this period, for the very first time after my school life I am living with my family. Normally, in day to day life we all are so busy in our work and routine. So, this Corona turned out to be a blessing in disguise. I never realized how much I missed them, how much I missed fighting with my sister, how much I missed my little Chinni who keeps following me all around the house. Never thought my day will be this hectic like office days and I would rarely miss office. I’m not a very talkative person and like my silent peaceful time a lot but here people are so talkative that it's a huge mess all over and they keep involving me in their chit chat. I realized even with all the noise around, I'm still peaceful and content to be making most out of this lockdown. Yes, our thoughts and way of thinking are way too different. Sometimes I seriously think “Have I ever actually "lived" with my fami
21 comments
Read more